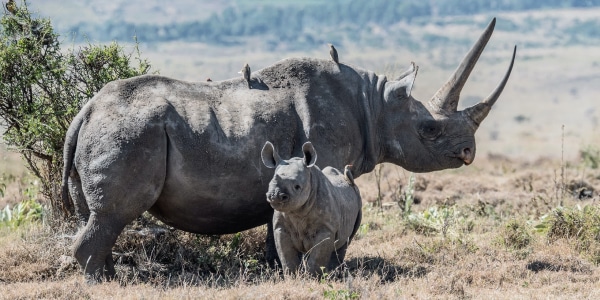 World Rhino Day was celebrated on 22nd September. Its mission is to spread awareness of rhino conservation efforts and inform how we can help continue that work. Zoos and rhino sanctuaries all over the world host events and fundraisers.

There are five species of rhino. Black and white rhinos are found in Africa, while the Sumatran, Javan and greater one horned are found in Asia. In the early 20th Century it is thought that there were as many as 500,000 rhinos in the wild. Now, however, their numbers are far lower.

Javan and Sumatran rhinos are critically endangered with less than 100 of each left. One horned rhinos, found in India and Nepal, are on the increase thanks to conservation efforts, but are still vulnerable. There is thought to be about 3500 in the wild.

Black rhinos are also critically endangered, with fewer than 6000 in the wild. White rhinos are the most numerous of all the 5 species, with numbers of around 20,000.

The Chitin National Park in Nepal is home to a population of one horned rhinos. One of the risks posed to them is from flash flooding. WWF helped to fund a project building soil mounds as refuge for the rhinos during floods. It is hoped that the rhinos will use the higher ground and stay above rising floodwaters.

Javan rhinos are among the rarest in the world. They are solitary creatures and rarely seen within their dense forest habitat. There is a small population in the Ujung Kulon National Park in Java. WWF provided camera traps so as to help monitor the rhinos and learn about their behaviour. Four new baby rhinos were spotted using the cameras which has given everyone hope for their future.

Black rhinos have been hampered by poaching and habitat loss. Their numbers reached a critically low 2500 in recent years. However, in March this year the IUCN reported some positive news. Their population numbers have risen to 5630. WWF worked hard with local communities, governments and NGO’s to fund campaigns in anti poaching and the illegal trade in rhino horns.

If you are interested in finding out more about supporting rhino conservation then please visit our Adopt a Rhino page.

Why Do Dogs Love Humans?

Leaving A Legacy To WWF